Day 19: write a sweet memory from your past
I am writing this post, whilst looking at this: 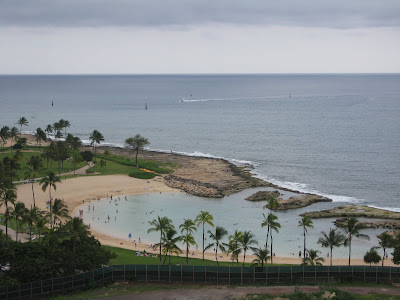 So I hope that explains the lack of posting for the past couple of days. I'm not really expecting sympathy exactly, but there you have it. We are with my family in Hawaii at the Marriott Vacation Club. Yup, life's pretty good.
To be honest, it's also been this post subject that's been stumping me. Partly for the ambiguity of "sweet". By this, do we mean something really fantastic, and super cool (that car is sweet)? Or something sentimental (ahh, that was really sweet of you)? Tough to say. I think I am going to go with the former. And I am in travel zone right now, so it'll be a travel story:
Matthew and I were in Munich. I wanted him see the classic "Hofbrauhaus". It is a beautiful classic beer hall where many historic events (including Hitler's Beer Hall Putsch of 1923) took place. The place is pretty touristy, but you have to see while you are there. So we agree to just go for a beer, and then grab dinner after.
We sit next to two younger guys, but don't talk to them for a while. One of them gets out to go the bathroom and tries speaking in German to us (this happened a lot). Then the other one did the same thing. They say something more substantial in German, to which we have to say we don't understand (shoot!). And then they do the customary "where are you from?" thing. (Nice guys).
We say we are from Canada, and one of the guys says: "You are kidding me! Let me introduce you to my friend Guenter!" And it all began.
Turns out Guenter - a graphic designer from Cologne - was in love with Canada, and he had just recently returned from a trip to Vancouver for which he had saved his pennies for years to go on. He was pretty certain Vancouver was one of the best places on earth, and he went on to show us his drawings which were inspired by his visit (see below). We continued to talk of Canadian music that he loved (Emily Haines) and so much more. Patrick, Guenter's old friend, was very similar to Matt and they had lots to talk about because he ran a hotel. After about a hour of talking, they asked if we wanted to go for dinner, so we went, and they took to us to a fantastic authentic German restaurant where Matt and Patrick ate Pork Knuckle. It was pretty much the best night of our whole trip, but it was such an unexpected delight.
Even now, Guenter and Patrick keep in touch (through the ol' facebook). They said we need to come visit again, and we invited them to come here too. A pretty great night which started at the most touristy place you can imagine. And that is why I love travelling. 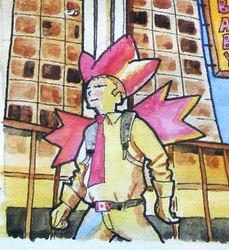 hope you're having fun in Hawaii! We're going to the same resort with my parents in December.

that maple leaf man is just about the coolest thing I have ever seen.

Randomly meeting locals is the best! One of my fondest memories from our trip in Spain was a 6 hour train ride that we ended up sitting with a girl from Brazil who produces operas and a guy from Spain who was a physiotherapist (we were all about the same age), and chatting that time away! And it has to be one of the redeeming things about facebook, right, that it helps maintain the connection...