Well, not all strangers but most. I don't know when it started, but I suspect it might have been the years as a Barista. The options were either having a mind-numbingly-boring shift (working at the slowest Starbucks in White Rock) or striking up conversations with random strangers. So, I usually opted for the latter.

And now, I do it without thinking. I will start talking to the person behind the till, or next to me in line, and it seems totally natural. Sometimes, strangers even come up to me and start conversations. It's almost like if you classify yourself as a person that talks to strangers, they start to approach you. At times, it can be awkward. But usually it is hilarious, and makes for fantastic stories, especially while traveling. Both Brenda and Lavonne are fantastic "stranger-talkers" so it made for some great travel stories.

But today I dropped the ball.

I was at having tea at Clancy's in White Rock, and this young guy comes up on a Motorcycle. He wanders in, takes off the helmet, and proceeds to buy some loose tea. I think that might be it, and he would just leave after that, but no, he sits down, at the table next to us, and has a cup of tea, by himself, A BIKER. And not like a scary biker, but wearing glasses, and friendly looking. I was so shocked by this obvious "strike-up-a-conversation" moment, that I couldn't do it. I totally froze. I couldn't think of any opening line that wouldn't seem like a come-on, or too cheesy, or keen. So, I said nothing. I mean, this guy even smiled when we said something funny. He wanted to talk, and I couldn't do it.

We left, sure that somehow "fate" had cheated us. Or something. The question is this...would you have started a conversation with this guy? And no, not to necessarily to flirt, but just to be nice, or would you (like me) have sat there wondering what to say, or just not said anything at all for fear of being over-keen? What would your line have been?
Posted by Sharelle at Saturday, March 28, 2009 5 comments: 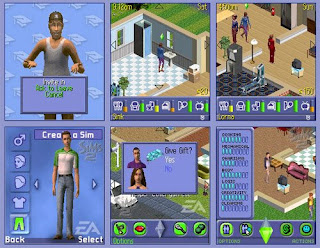 This weekend in a lengthy, and somewhat over the top blog conversation (yes, I have those) - it was determined that a good blogger is a frequent blogger. I am not so sure about this, particularly because the accusation came from a NON-blogger, but I suppose there is some merit to the admonishing I received.

So, here we go. I always say I will blog about things, and then I don't, so this time I am keeping true to my word:

Remember when you used to play the "Sims" (circa about 1998 for me), and you had maintain all those little areas like health, and friendships, and work etc. So you would go hang out with a friend for an afternoon, and you'd be doing really good on the relationship front, and then bam! you're health was way off, or your career success. So, there you were navigating your little character around, scrambling to keep all your "levels" in the green. And it was hard to do right?

I think the Sims might have been on to something. Yesterday, I had the distinct sensation that I might have to "get used to the idea" that on a day to day basis, I am probably going to have to let someone down. I know, that sounds really defeatist, but I think its going to be freeing for me. For example, with TOC'ing - people start requesting you, and then two people request you, and you have to reject one, and you feel really bad. And then you realize "sometimes, I am going to have to let people down".

Now, I am not saying we should let ourselves off the hook when we really do need to feel bad, but I am saying that we need to have a little perspective. I've been told I have a pretty over-active "guilt-complex", that is, I apologize for too much, and even things outside of my control. So maybe this post is just a little pep-talk to myself, and anyone else with the same complex, just to say - you have to do your best, and you won't make everyone happy all the time. Too defeatist? Nah....
Posted by Sharelle at Monday, March 23, 2009 4 comments:

Today was a good day for blogging....

Not for me necessarily for but for everyone else. Because I have this fantastic new "blog-roll" now, I can see who posted today, and I had a lovely read tonight.

I wish that I could add to this collective joy, and post something magnificent, but I don't know if I want to contend. So, when I fail to come up with good words myself, the inevitable conclusion is that I steal from someone else, or direct you to them, which I am about to do.

Nick Hornby from today's post entitled "My Waterstone's Writer's Table". It's a long list of book recommendations. But at the end, this wonderful diatribe about the books we love. Go read it. It's Nick Hornby in good form.

It can happen anywhere: a dinner table, a pub, a bus queue, a classroom, a bookshop. You have struck up a conversation with someone you don’t know, and you’re getting on OK, and then suddenly, without warning, you hear the five words that mean the relationship has no future beyond the time it takes to say them: “I think you’ll like it.” This phrase is presumptuous enough when used to refer to, say, a crisp flavour; if, however, you happen to be talking about books or films or music, then it is completely unforgivable, a social solecism on a par with bottom-pinching. You think I’ll like it, do you? Well, it has taken me over fifty years to get anywhere near an understanding of what I think I might like, and even then I get it wrong half the time, so what chance have you got?

And not to suggest that I am only talking about British writers, some other blogs that you should go read today.

Margaret: "And Now for Something Completely Different"
The Monty Python reference says it all. There is a quote from Winnie the Pooh. Great stuff.

Spiro: Lupe Ontiveros: "I've given every maid I've ever portrayed my soul and heart"
In classic Spiro style, she pulls out this fantastic quote, which makes you think and makes you smile. I might even say "heartwarming" but that might turn some away. Or it might take away from the great post that this is.

And maybe, if you know her, go click on Bec Shulba's blog. She might be mad I said that. But she kind of went for the gold with this one post. Just putting it out there.

Days like this convince me even further, that blog haters are just that - haters. Maybe the people who hate blogs and perceive them as mindless drivel don't have the kind of insightful friends that I do. (Did I just refer to Nick Hornby as my friend?) That is my conclusion.
Posted by Sharelle at Tuesday, March 03, 2009 2 comments: