five reasons why I am happy in spite of the canucks... 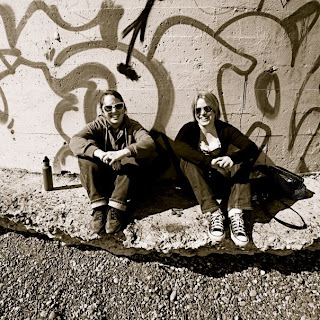 (Photo by Kristina Vbvv..and not me, obviously)

There is no shortage of things to be sad about at the moment. I mean, the canucks lost, and there is an economic downturn. So, I figured it was time to post about some things that have me happy in the past couple of days. Why not try to turn the tides a little?

#5 - solidarity
The very fact that our most of our city is sad today shows that we are still capable of some kind of solidarity. It almost feels like "football" in England. Just to know that about 80% of the city is doing the same thing as you, hoping for the same things as you and now feeling the same sadness as you, makes it all a little better right? If you want the truth, I mostly watch hockey for solidarity. I like talking about it at work the next morning. ha.

#4 - the approach of summer
As I drove to the ferry to pick up Spiro yesterday, the sun was setting in the clear sky, and it felt a lot like the start of summer. I realized that some time the past two years, I started being affected by seasons. I never much cared before what season it was (probably because I was in school for all of them) But now, different seasons mean different things, good things. I thought of fireworks, and summer sunsets, and long evenings, and it made me smile.

#3 - cp's
Spiro was here this weekend, and we went to the island to visit Kristina and her husband Johannes. I was amazed again that here we are 5 years after Capernwray, and we still like each other this much. That is fantastic. We walked everywhere in the sun, sat on the balcony, listened to music and generally enjoyed one another's company. It was pretty fantastic, and kind of felt like a little preview of Europe.

#2 - Europe
This week I had a multitude of emails from people travelling in Europe, and it made me realize that it's going to be me in less than a month. It still doesn't feel real. Booked tickets to see "Waiting for Godot" in London with Sir Ian McKellen & Patrick Stewart (Yes Magneto AND Xavier). Ohhhh man. X-men and Shakespeare in one city. Best city of the world - no contest.

#1 - White Rock White Spot
Yesterday, I was at home doing laundry and watching game #6 when I decided I needed to get some food. We all know how bad I am at preparing for food for myself, so I thought I would go pick up some White Spot. I get there, and I look over to see Stefanie & Heather sitting there watching the game. I asked the waitress if I could eat my take-out in the restaurant. She looked a me a little funny, but I went for it. And it was fantastic. I mean, really, when does that happen? So classic White Rock. We sat with a couple random guys and cheered and booed at the appropriate times. That is some great solidarity there.

I guess it all comes back to solidarity, doesn't it? So there is mine, how about you? There has to be something that is making you happy today.
Two Top 5's in a row....Yup.
Posted by Sharelle at Tuesday, May 12, 2009 6 comments: